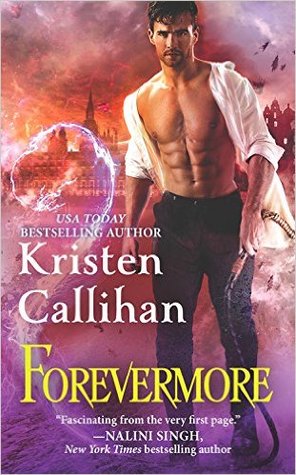 Outstanding ending to a fabulous series!

I habitually have a hard time picking up the last book in a series. Because, you know, I don’t want to say goodbye. I don’t want the story to end. I don’t want to face the yawning despair that once I read this book, it’s over. I’m clingy and needy when it comes to characters and stories I adore. I’ll own that.

So when I say that Forevermore gave me everything I wanted in a series ender AND MORE, you should look impressed.

We got answers and endings and we got to revisit old favorites. We got Sin and Layla’s romance. We got to go back to Miranda and Archer and see how the only mortals of the group have fared since their first introduction. This book took us full circle and ended things spectacularly.

In the end, though, this is Sin and Layla’s story. Sin’s withdrawal from his family and friends–with good reason–was hard to see. The torment he suffered at Mab’s hands has left a mark and he’s not the boy Layla remembers. Her ability to crash through his walls and make him WANT again was outstanding. And she did it all just by being her. The fact she is more than a match for Sin’s unpredictable power was the cherry on top. THESE TWO, MAN. These two.

I’m sad to see this series end, but I can’t complain about how wonderfully it did. Here’s to all the crazy shenanigans this crew will get into now that they have nobody looking.